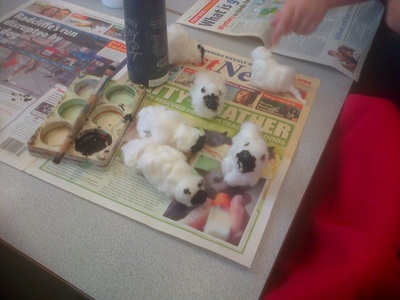 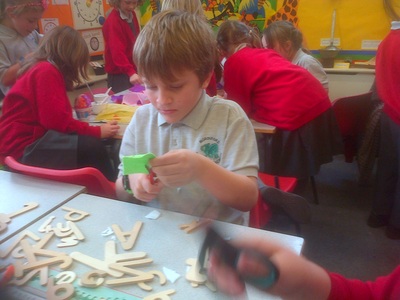 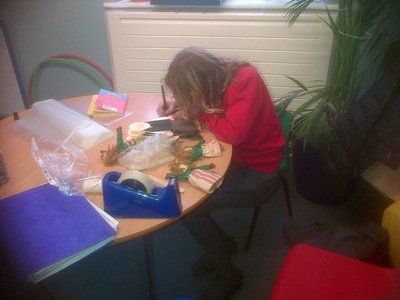 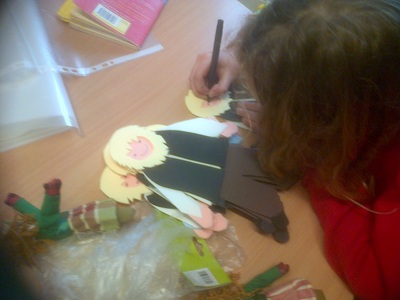 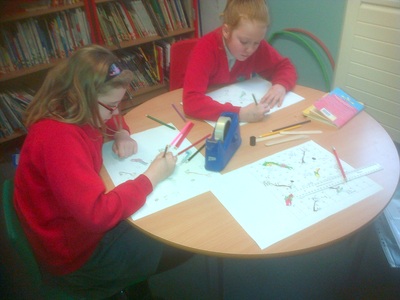 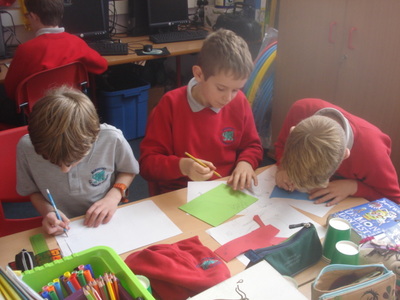 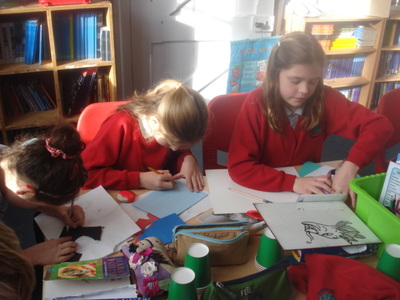 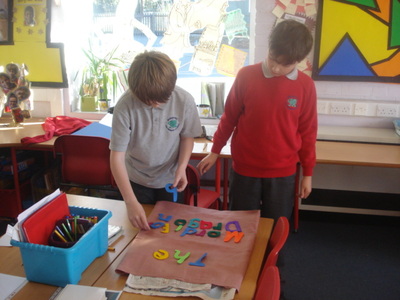 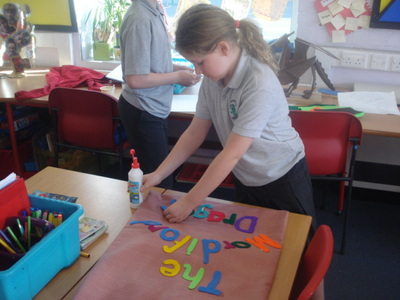 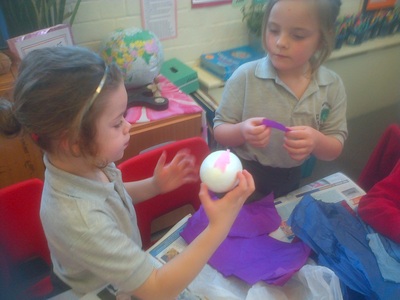 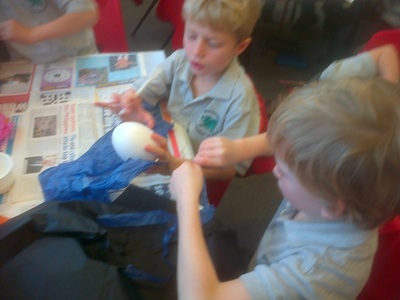 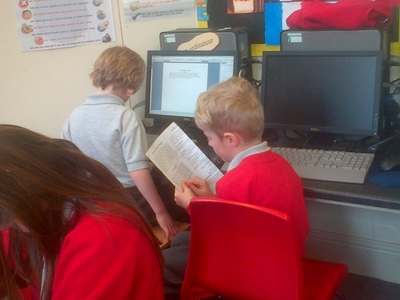 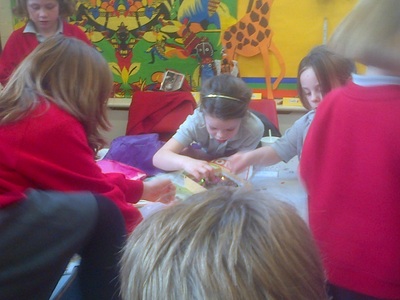 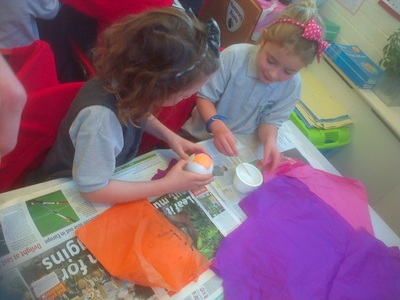 ﻿Pupils from every class have helped to make our Mordiford Dragon Story sacks.  We had great fun finding out about the story and then making the props for the story.  Mrs Parret, Mrs Blenkinsop and Mrs Griffith helped us too.
There are a number of versions of the legend of the Mordiford Wyvern and they do not all feature Maud.
The one mentioned in the story, on the wall of the church, says the dragon was slain by a Garstone, a member of the local nobility, but more stories tell of its slaying by a convicted criminal.

The stories had been passed down through word of mouth and were not written down, apart from on the church wall, until the 1790’s when first a Samuel Ireland visited Mordiford and was told that the dragon was slain by criminal hidden in a cider barrel. Then in 1799, George Lipscombe was writing a travel book and saw the dragon painting on the church wall. He was told about the dragon that had terrorized the village, eating livestock and people and whose favourite drinking spot was the point where the rivers Lugg and Wye joined. No one dared to fight the dragon until a condemned criminal offered to try, if he succeeded his reward would be a pardon.

Some stories say that he hid in a cider barrel, close to the dragon’s drinking place, and shot him through a hole in the barrel, or fought the wyvern and won – but then died himself when the dragon breathed fire at the barrel with its dying breath.

The earliest written story that included Maud was in 1864, ‘The Mordiford Dragon and other subjects’.

The Painting in the Church
Many travellers through Mordiford before the 19th century, were intrigued by the painting on the western wall of church. There have been many descriptions of the painting. Sometimes the dragon or wyvern had only one pair of wings, at other times as many as four. The number of legs has changed between four, two and none over the years and although it was usually green, sometimes it was red.

However, the church was restored about 1812, possibly because of damage from a terrific storm in 1811. Either no one thought about replacing the dragon or, as is sometimes recorded, the vicar thought a dragon was a sign of the devil and ordered it to be destroyed.

What about Mordiford?
The village of Mordiford grew up around an ancient ford over the River Lugg. As well as its dragon legend, it is famous for its bridge which has 9 arches and, at more than 600 years old, is one of the oldest registered bridges in Herefordshire.
The pathway taken by the wyvern through Haugh Wood, where it was first found by Maud, to its favourite drinking spot where the Lugg meets the Wye, is called Serpent’s Lane. It is said that nothing grows on the trail a dragon has taken!

Wyverns or Dragons
In the different versions of the Mordiford story, the creature is sometimes called a dragon and sometimes a ‘wyvern’. The main difference is that dragons traditionally have 4 legs and wyverns have 2 and are generally smaller.
It is like a reptile, has leathery wings, often has horns or a crest on its head and has a tail with deadly poison in its tip. Some wyverns breathe fire like dragons, others would breath out poisonous fumes. They are both extremely difficult to kill. Wyverns were also believed to carry diseases like the plague and outbreaks of plague or other diseases affecting people or cattle, would often be blamed on them.

Wyverns, like dragons, are often found in heraldry – the patterns that a nobleman or king would use on his flags, shield and armour to distinguish him and his men from other noblemen. The Garston family, one of whom slew the dragon in one of the versions, had a crest that included a wyvern. The Welsh flag, on the other hand, features a dragon and was supposed to have been designed by King Arthur’s father, Uther Pendragon. 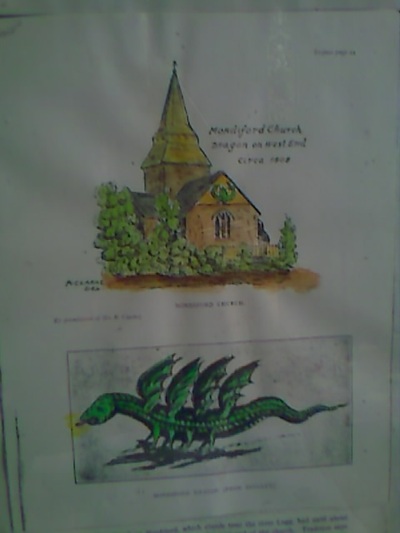 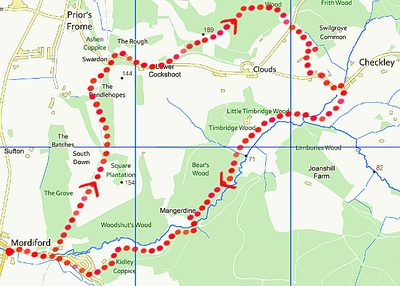 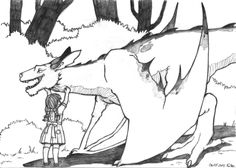