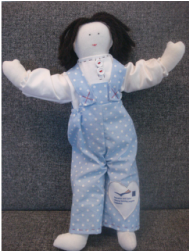 Comenius Project
This is 'Comini', our project mascot.  She is named after Jan Comenius.  Our friends in Poland made these lovely mascots.  Comini has travelled to every school in the project and she is really enjoying spending time in the schools and meeting the pupils and school mascots. 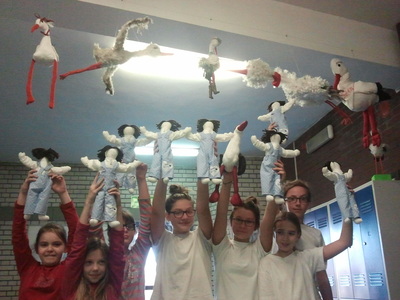 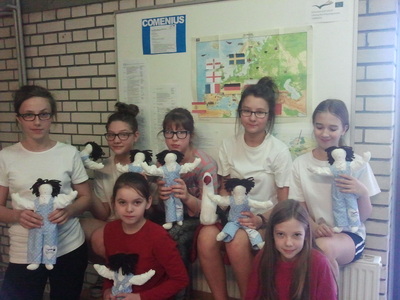 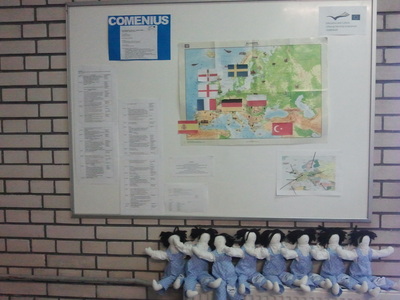 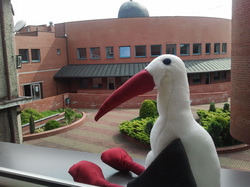 Poland
This is our mascot. He was created by one of our students, Natalia. There was a school competition and several other storks wanted to win, but we loved this one. So meet The Stork. 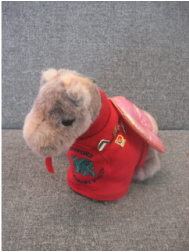 England
This is Mortimer the dragon.  He is the mascot of Mordiford Primary School.  Mortimer is a very well travelled dragon because he has been involved in 3 Comenius projects and a UKIERI (India) project.  Mortimer likes to collect badges of the flags of the countries he has visited and then pin them on his school jumper.  Some of the badges he has are from: Sweden, France, Spain, Turkey, India, Northern Ireland, Ukraine and Italy.  Mortimer is looking forward to meeting lots more pupils from our partner schools as he always enjoys a cuddle. 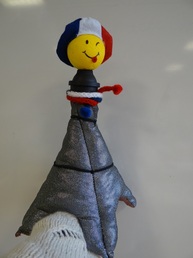 France
﻿Let us introduce you to this Rico, the Eiffel tower. Say “BONJOUR” to our French mascot. Two pupils designed it, children voted and selected it and it was created by one of our student’s mum (many, many thanks to her for her talent and efficiency!) We are sure you will recognize this very famous monument in Paris… 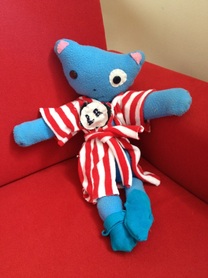 Sweden
This is Lasse-Britta, the Swedish mascot. The name Lasse-Britta is a unisex name with Lasse as a male name and Britta as the female. The tag LB on the dressing-gown is also from the name of the Swedish school Långbrodalsskolan. Our 10-year old students in grade 4 have created this amazing mascot during needlework class time in school in autumn 2013, all by their own choice. 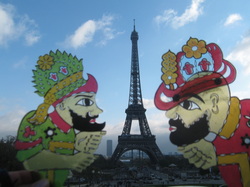 Turkey
These are Karagöz and Hacivat. They are famous shadow game characters. It is said that, once upon a time they lived in Bursa-Turkey. 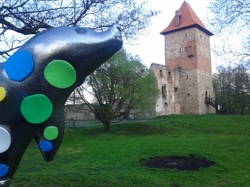 Spain
This is Ray, the dolphin. He lives in The Strait of Gibraltar, a narrow strait that connects the Atlantic Ocean to the Mediterranean Sea, and separates Gibraltar and Spain in Europe from Morocco in Africa. 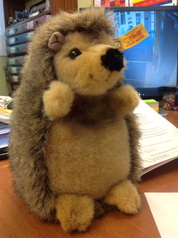 Northern Ireland
This is Hugo, the hedgehog. We chose a hedgehog as our mascot as we had a family of hedgehogs living in the school garden.  Sadly, we had to send one of them away to a rescue shelter as it was poorly.
The name Hugo was chosen by one of our pupils in a school competition. 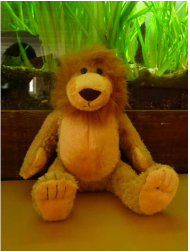 Germany
This is Leo, the lion. The lion is the heraldic animal of the emblem of Bonn. Once the sculpture of the lion was placed on the Münsterplatz, a central place in the city. Nowadays there is the monument of Ludwig van Beethoven- a proper alternative. So we took the lion and travel now with him around Europe, meeting lots of nice and friendly people and funny mascot-friends. 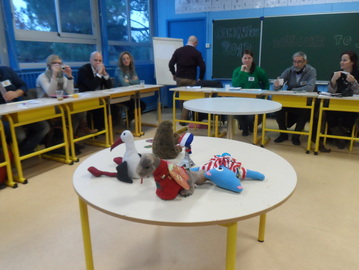 The Comenius mascots meet for the first time in Bordeaux!