The story sack made by Sweden

Many, many, many… years ago the people in Sweden believed in many Gods 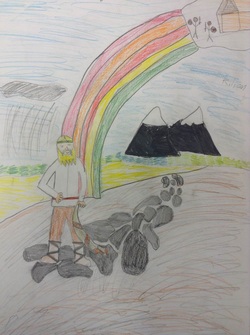 The Gods' home in the sky is named As-gård. There have almost every God their own house. The Earth was flat. Your land name are Midgård. The Giants lived at the rocky and wild coast. Their land was a bridge from Earth for As-gård. Sometimes the people could see the bridge. The god Heimdall stood on his guard at the bridge. Heimdall had such good hearing that he heard the grass grow and the wool grow on the sheep. Heimdall owned a big horn and he would blow it when the world was going down. 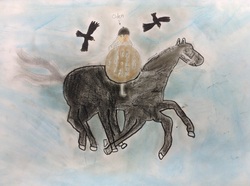 Oden was the oldest and most powerful of all gods. His house was called Valhall.

Oden's horse Sleipner had eight legs. Therefore it was never tired. Oden also had two ravens. They were called Hugin and Munin. The ravens flew around the world and they whispered news in Oden's ear.
Mimer was a wise giant. When Mimer was killed Oden took his cut off head. Oden enchanted the head so that it could speak and put it into a well. Mimer's head gave Oden answers to all the important questions. The person who drank from the well of Mimer's became very wise. Oden tore out one of his eyes and threw it down to Mimer so he got to drink from the well. 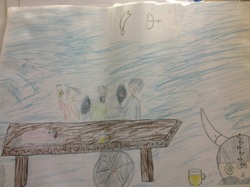 In Vallhall there was no food shortage. Every day you ate up the pig Sarimner and every morning the pig was alive again. Oden had Valkyries in his obey. There were women who rode to Earth and when there was a war between the people they decided which men would die in the battle. If the dead fighter had been brave, he would come to Oden in Vallhall. There it was joyful and like a party. There he could practise to fight and if he was hurt or killed he would at once be healed again. 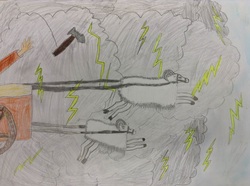 Tor was the strongest of all the gods. He was Oden's son. Tor had a hammer called Mjölner. With that Tor killed many giants. Tor had to have iron gloves to hold the hammer. When Tor threw the hammer it always hit what he had aimed at and then it always came back to Tor's hand. Tor also owned a strength-belt. When he wore it, he was twice as strong. Tor was often out driving with his two goats. Then there was thunder and lightning. The people could see and hear that. It was thunder. 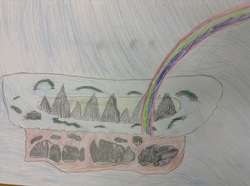 Loke was annoying and evil. He was son to a giant. Oden had promised Loke to live with the Gods. Loke had three terrible children. Their names were Midgårds-Ormen, Hel and Tenris-Ulveven.  Midgårds-Ormen lay in the sea. He reached around the whole world. Hel was a death goddess. She ruled in the underworld. To that place they came who died of illness and age. 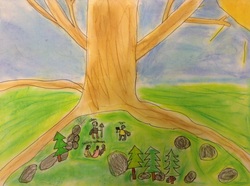 A big Ash tree grew up from the ground, high up in the sky. It was the world's tree Yggdrasil.

Also at the tree sat the three norns -  Urd, Verdandi and Skuld. They were fate goddesses who decided how long each human would live and how their life would be. 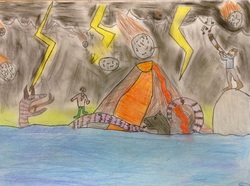 The world comes to an end.

Ragnarök
The god Heimdall blows in the horn. The gods gather their armies to fight against giants and beasts. The Fenris wolf comes loose. It eats both Oden and his horse. Oden's son Vidar wants revenge. He sets his foot in the wolf's mouth and pierces the heart of the Fenris-wolf with his sword. The god Tor fights the Midgård-snake. Finally Tor succeeds in killing the snake. But Tor only gets nine steps away before he himself falls down dead. Eventually the Earth burns up and drops sizzling into the sea. 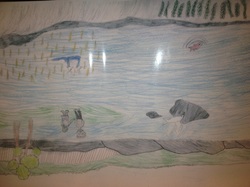 There it grows on the field without anyone sowing. The lakes were full of fish and the birds are singing. A man and a woman have survived the Ragnarök. They have children and people live on the Earth once again. The innocent gods smile. The king Balder is now the king of gods. All nice people can come from the death kingdom to the paradise. There they live in a house of gold and live in eternal happiness.
The end.
Proudly powered by Weebly